~Thank you for the best gift I will ever have! I feel so fortunate. Jaden

~Cody is truly a “life-saver”! He allows Darla to attend activities where she would otherwise require our supervision. ~Sandra .

~Grace has a friend, a companion, and hope for a happier, easier future in Copper! ~Kimberley.

~ Casey alerted to a serious diabetic “low” from 30 feet away when Zyler was swimming laps in a chlorinated pool! ~Melissa 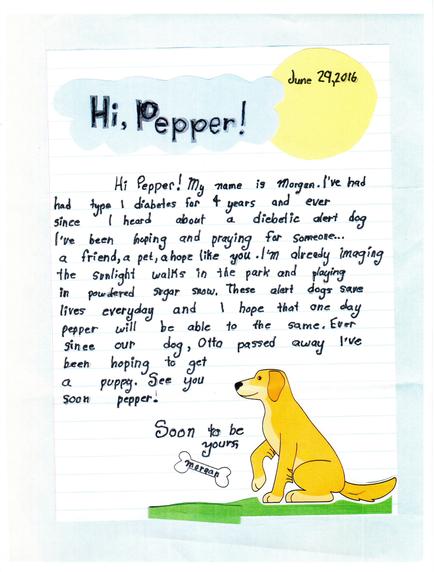 ~ It is such an amazing thing to feel freer from worry than ever before in our lives. This program has definitely changed our lives for the better ~ Erica..

A letter from a happy mother

To whom it may concern:

Re our allergy alert dog, Cody, who was trained by, and donated by Jerry Gilland .

Cody has been a lifesaver, literally! Because of our daughter’s severe food allergies, her ability to participate in normal activities for a child her age (currently 8) has been limited and always requires an excessive amount of adult involvement and supervision. This is especially true when there is any kind of food or snacks involved and most children’s activities seem to involve food. Cody daily alerts to the presence of allergens and allows us to either appropriately clean the area or remove Darla from the vicinity as necessary. Even though we understand it is our role to remain vigilant, Cody is able to identify problems areas often before we can or when we can’t immediately see the offending substance. ...........

Cody has even amazed the allergist at one of Darla’s appointments. The medical staff wanted to test how sensitive Cody’s nose was to peanuts and see what he would do when exposed. They wanted to try putting the serum used for the skin prick allergy tests on a piece of gauze and then have Cody “check it” (one of his commands). These serums have a very SMALL amount of the potential allergen diluted in them. First they used one of the serums Cody is not trained to detect. When told to “check it”, Cody sniffed it, but did not respond. They then put a couple drops of the peanut serum on gauze and had him “check it”. Cody sniffed at the gauze a few times and then gave a clear alert! The amazing thing was that when the allergist tried to step past Cody to show the gauze to Darla, Cody stood up, put himself between Darla and the allergist, stuck his nose and tail out in a straight and rigid line, and gave another alert. The medical staff all was amazed at how Cody had not only detected the small amount of peanut, but demonstrated a protective response for Darla, too! ..............

Cody has also been a fantastic ambassador for food allergies. Rather than feeling left out and different, Darla (and Cody) often find themselves the center of attention. .........

I cannot say enough about how well Cody is trained and how exemplary his behavior is on a day-to- day basis. When in a school or group environment, Cody is often so quiet under the table that people don’t even realize he is there until Darla gets up to leave. He does not prove a distraction as teachers and leaders are often initially concerned that he will. We routinely receive remarks about what a good dog Cody is and the owner of a local pet supply store had this to say: “Cody is the best behaved service dog I have ever seen. We have three or four service dogs come in here every day, but none of them are nearly as well behaved as he is.” ..............

We love the extra layer of protection Cody provides and the educational opportunities that occur as a result of his presence.